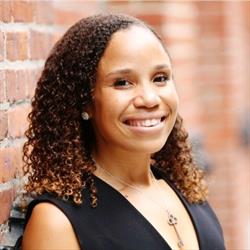 Spelman alumna Jeff, Ph.D., MSC, C’2007, was recently awarded the 2020 Advocacy Award by the American Society of Human Genetics, the largest professional organization for specialists in human genetics. Jeff, a senior bioinformatics scientist at Illumina, a company at the intersection of biology and technology, is the first African American and youngest recipient to receive the honor.

The award, which includes a plaque with a $10,000 prize, honors individuals or groups who have exhibited excellence and achievement in applications of human genetics for the common good, in areas such as facilitating public awareness of genetics issues, promoting funding for biomedical research, and integrating genetics into health systems. Previous awardees include Marie Claire King (the woman who discovered genetic breast cancer findings for genetic screening).

Taking STEAM Activism to the Next Level

“I am inherently an educator and STEAM-activist who is deeply rooted in the community. I am also a motivational speaker and recently a podcaster after winning the inaugural Spotify’s Sound-Up Bootcamp (out of 18,000 applicants) for my podcast, “In Those Genes,” which is a science and culture podcast that uses genetics to decode the lost histories of African descended Americans,” Jeff said.

“Dr. Janina Jeff’s groundbreaking podcast “In Those Genes” has provided fundamental insight into genetics and the exploration of the lost identities of African-descended Americans through the lens of Black culture,” said ASHG President Anthony Wynshaw-Boris. “She is also an inspiring leader with a deep commitment to educating others and is a very important spokesperson in human genetics for a wider audience beyond scientists.” 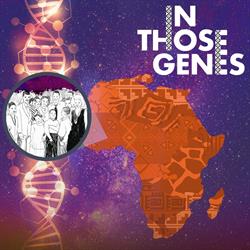 “In the wake of COVID-19, the podcast has quickly evolved as a forum dispensing scientific and medical truths and dispelling rumors and conspiracy theories circulating in the Black community on social media,” said Dana Crawford, Ph.D., associate professor, Department of Population and Quantitative Health Services, Case Western University, in her nomination letter.

Dr. Crawford concludes her nomination letter by noting “In Those Genes” addresses issues of direct interest to a group often neglected in general science or genealogy podcasts: the Black audience. So far in its first season, “In Those Genes” has discussed direct-to-consumer (DTC) genetic testing and genetic ancestry estimates, comparisons of Black-owned DTC genetic testing companies, Ancestry.com’s romanticization of genetic ancestry and slavery, and participation in the All of Us Research Program, among other topics related to genetics. All of this is done with Black and current cultural references that effectively explain complex definitions and jargon.”

Learning and Leading by Example 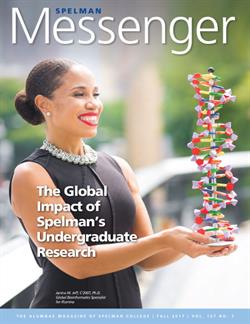 Dr. Jeff is the first African American to graduate with a Ph.D. in Human/Medical Genetics from Vanderbilt University. She also received a Master’s degree in Applied Statistics from Vanderbilt University and a Bachelor’s degree in Biology and Spanish minor from Spelman. After her Ph.D., she pursued postdoctoral training in the labs of Eimear Kenny, Ph.D. and Erwin Bottinger, MD at Icahn School of Medicine at Mount Sinai.

Her research career was focused on population genetics, specifically studying complex and admixed populations (descendants with African ancestry) and discovering population-specific genetic risk factors of common disease. The launch of her podcast, “In Those Genes,“ won Spotify’s Sounds Up Boot Camp. Episodes can be found on Spotify, Apple, and all major podcasting apps.