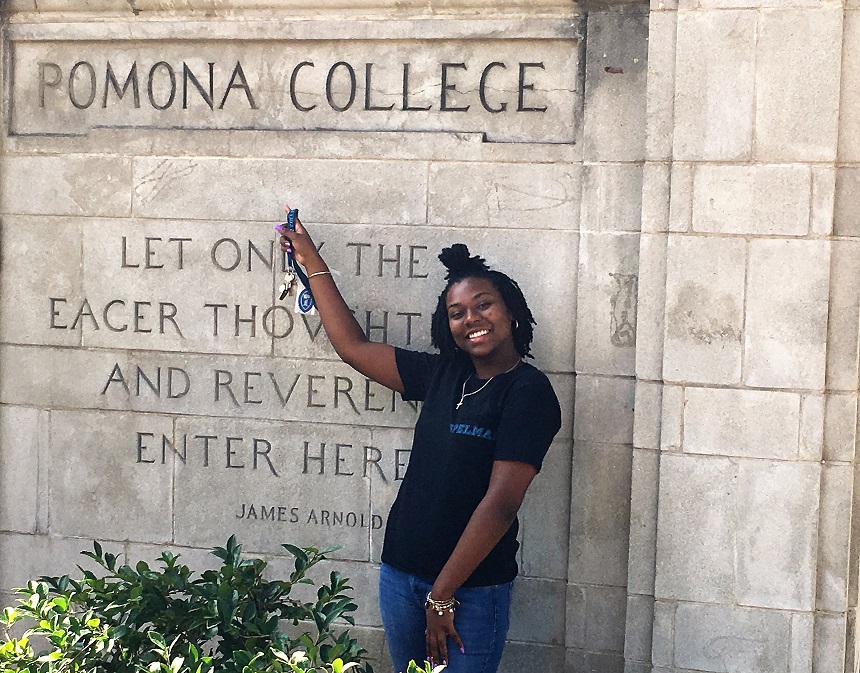 Reflecting on my experiences during domestic exchange is very difficult for me. How can I describe an experience that has impacted me academically, mentally, and emotionally? When I first arrived at Pomona College, I had butterflies in my stomach and sweaty palms. I arrived on their campus during their New Student Orientation, surrounded by freshmen. It was a moment of reflection as I watched the students say farewell to their parents for the first time, ready to embark on their journey into adulthood. As a junior, I went through that moment of my life before. Arriving at Spelman not knowing what I will make of it but knowing that the institution has something special for me in store. When I arrived at Pomona, I suddenly felt as if I made the wrong decision. I stepped away from my comfort zone with my caring professors who knew me by name and my friends who I could always count on for going to the cafeteria with or simply hanging out. I did not have that sense of security at Pomona. I had to step up and make new connections with professors and students, almost as if I received a huge “do-over” for my first year, but at a different institution in a completely different state. One of the factors that pushed me to select Pomona College was the fact that, identical to Spelman, Pomona is a liberal arts institution that prides itself on having small class sizes. Although I was only at Pomona for a short amount of time, I was easily able to cultivate genuine relationships with my professors and peers, who I still keep in contact with to this day.

My time at Pomona College gave me the ability to develop a clearer mindset regarding my goals and values. Some Spelmanites tend to put themselves on the backburner for the sake of performing well academically, keeping up with appearances at Market Friday, completing varying community service projects, and simply keeping up the image of the “Spelmanite”. With that behind me in Atlanta, I was able to approach this new academic endeavor with a blank slate. I was no longer, “Miah, the Social Justice Fellow” or “Miah, in the Honors Program”. I was simply “Miah”.

Living amongst freshmen at a co-ed school was a bit different from my role at Spelman College. I was able to learn with other new students as we all were taking a huge leap of faith into this new world. The Claremont Colleges Consortium was very different compared to the Atlanta University Consortium. Besides being able to swipe into any of the five cafeterias whenever I wanted, I was able to be academically challenged at the different institutions without having to go through a maze of paperwork to register for one class at a different institution. Students at one institution were able take courses in that same  major at a different college which provided a sense of unity through the 5Cs. You may be taking a class at Pomona College, but you would meet students from Harvey Mudd, Claremont McKenna, Scripps, and Pitzer, all in one class.

Navigating the space as an African-American woman was difficult as the institutions ended their 2016 Spring semester amidst many protests against the actions of school administration in the Consortium. For example, at Harvey Mudd College, an engineering and computer science-focused institution which is predominately white and male, a diversity initiative was introduced, and racist comments arose from professors and students complaining that the quality of education has diminished since more Black and Latino students were in the classes. Although Spelman College and the rest of the Atlanta University Center have been through their fair amount of protests on campus, specifically centered around gender and Title IX, I was in a collegiate space in which I felt as if was 100% safe. This displays my privilege as a cisgender woman at the all-female institution of Spelman College. Every institution has their flaws and it is dependent on the students to hold their administration accountable, making the academic experience inclusive and safe.

Overall, I am fortunate to have been able to participate in the domestic exchange and I am grateful for the opportunity. Without my semester at Pomona College, I would not have had the ability to meet people from all over the world who have changed my perception. I was able to have two on-campus jobs and volunteer with two different initiatives during my time away and those experiences alone have impacted the ways in which I think and interact with others. Domestic exchange helped me to learn and grow while discovering a new sense of independence because, in this situation, I did not have a Spelman sister to hold my hand along the way. My time at Pomona College was transformative and I encourage all students at Spelman College to at least consider a domestic exchange or study abroad program. Similar to the college admissions process, if you do your research and select the right school for you, you will not go wrong.