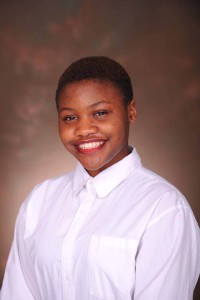 The Honors Program’s Ethel Waddell Githii Scholar Award* was conceived and first awarded in 2015 to recognize a first year student who has demonstrated scholarly curiosity, intellectual presence, critical consciousness and personal discipline. “The Award is intended to make tangible those values of the Program and the College that may seem abstract, “uncool” or unrewarded. Our students best demonstrate these “abstract” qualities to their peers as tangible and important signs of self-actualization or, the “birth of your personal cool,” says Program Director, Opal Moore.

Faty-Sharon Sylla was the first recipient of the Githii Scholar Award. Sylla is an international student from Paris, France, double majoring in International Studies and Comparative Women’s Studies. Sylla was both honored and surprised to receive the award. She engaged in dialogue with members of the class of 2019 at the 2016 “Reconnect,” an informal dinner where students get to debrief their first semester experiences and talk about what they will take into the second half of their first year.

As a first year student, Sylla said she felt lost at Spelman. However, receiving this award helped her realize that she was going down the right path. “I realized my freshman year that I could learn just as much outside the classroom as I learned inside. So, that year I participated in events and activities that were going on around campus that were of interest to me.”

The Honors Program is a co-sponsor of many campus lectures and presentations, and strives to keep students informed of important events happening around campus via its website, its social media platforms (Facebook, Twitter) and posts on its bulletin boards in Giles Hall and LLCI. Sylla still remembers the first event she went to that sparked her interest. “It was an event sponsored by the Women’s Research and Resource Center.” The event was a film screening of “Roadmap to Apartheid,” [a documentary on Israel’s occupation of Palestine]. “After that, I kept going to events hosted by the Women’s Center and the Social Justice Program.” Sylla is now the campus representative for the national organization, Students for Justice in Palestine (SJP), on Spelman’s campus.

Sylla advises first year students to work on their intellectual journey. “I encourage all freshman to get out of the classroom and dorms and be involved in the community. Not just in ‘campus life.’ Participate in what’s going on in the world. Try new things. Even if you don’t know what something is, go, discover.”

The Honors Program is about more than dazzling GPA’s,” says Moore. “The GPA is one kind of measurement. We want to recognize the whole person, which is about integrity, relevance.”

* Nominees for this award will be accepted from the Honors student body and reviewed by previous awardees and the Director. Nominees must be in good academic and ethical standing in the Program.